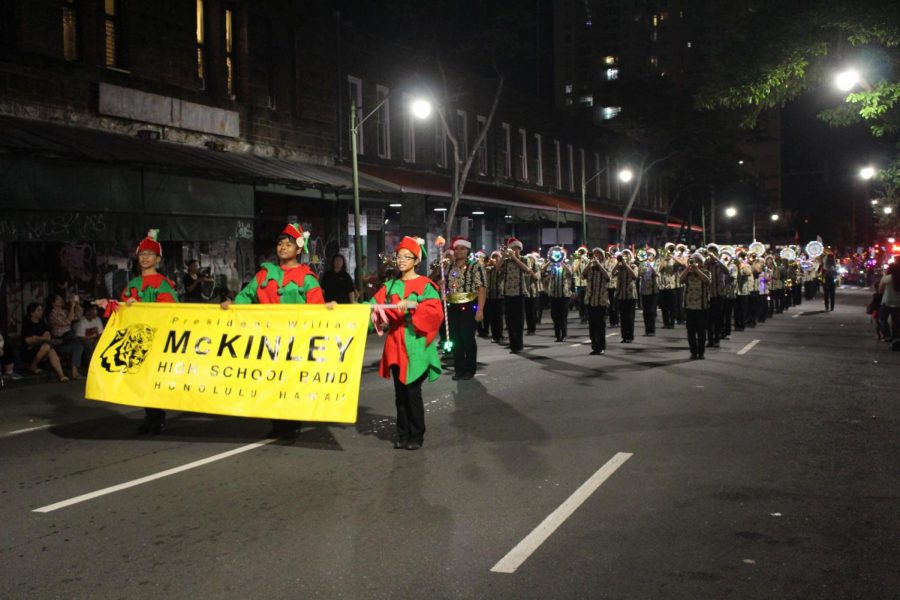 McKinley’s marching band performed the Honolulu City Lights Parade on Dec. 7 at 3:30 to 8:30 p.m. which started from Aala Park (King St.) and ended at Honolulu Hale. This was the last parade for the school year.

Jennifer Nakamoto is a math teacher, department chair of the math department, and is the band booster president in the Band Boosters Association. She said she was a part of the boosters for 7 years and was encouraged to be a member of the association by her son.

Nakamoto said the duties of being a part of the Band Boosters are concentrated on taking care of the marching band members by providing water and protection.

“We have to carry water [and] we try to spread ourselves among the students during the parade, so we stop people from entering the parade. We protect students from the people on the outside. We also make sure that the students get water if they need it.”

“It’s fun being a booster, getting to help the students and being around them is fun,” she said. “The best part is chaperoning football games.”

Rona Duldulao is a sophomore flute player and is a part of McKinley’s marching band. She said her favorite part about the parade was the support given from the audience.

“My favorite part about City Lights is since there are usually a lot of people there, they cheer us on and give us a lot of support,” Duldulao said.

Katherine Liu is a sophomore percussionist and a member of McKinley’s marching band. She said her favorite part about the parade was showing pride.

“My favorite part about the City Lights Parade was showing Tiger pride when our band played for the newscast,” Liu said.

Duldulao described the setting of the parade as a crowded and lit up area. She said it was her favorite parade to march out of two other parades (Waikiki Holiday Parade and Hawaii Kai Lions Parade).

“City Lights is always packed with people,” Duldulao said. “The road we march is surrounded by buildings so it makes our sound echo a lot, which I like because it fills up the area. Once we get to the big Christmas tree, the area is always decorated with lights and a lot of stuff which look really pretty. City Lights is my favorite parade to march.”