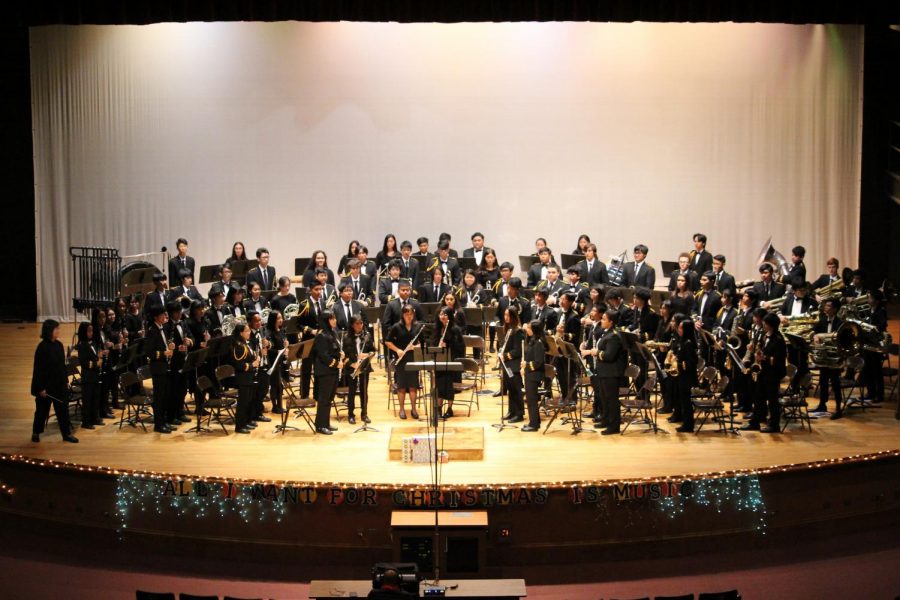 McKinley High School's band and orchestra has presented their Winter Concert! It featured a selection of Christmas songs to celebrate the holiday season.

Jennifer Nakamoto is a math teacher, department chair of the math department, and is the band booster president in the Band Boosters Association.

“The band boosters are the ones who greet everybody coming in,” Nakamoto said. “They were selling fundraising stuff outside. We help alleviate costs with the band and orchestra banquet at the end of the year. The boosters are the ones at the concert that were collecting money for the CDs and taking orders if people wanted to order a CD of the Winter Concert.”

Rona Duldulao is a sophomore flutist and is a part of the McKinley music program. She said she wanted to exceed the audience’s expectations.

“I felt really nervous for Winter Concert since it was my first time performing with just Wind 1 for a concert,” Duldulao said. “I really wanted to play my music the best I could. I didn’t want all the time of my practice to go to waste. It was a really good experience.”

Katherine Liu is a sophomore percussionist in the McKinley music program. She said performing in the concert was a good experience.

“I enjoyed performing the pieces that we worked on for the audience and I think it was a good way to spread holiday cheer and improve musicality,” Liu said.

Christmas music was given out in October. The McKinley band and orchestra program began practicing the music to perform the Winter Concert.

“We usually get Christmas music pretty early and once we get it, we start to play it in class altogether right away,” Duldulao said.

Duldulao said one of her favorite songs in the concert had a story.

“My favorite song during Winter Concert was ‘Pilatus’ because it sounded like it came out of a movie,” Duldulao said. “Because it had a story, you were able to connect the story and song together which gave it a better feeling and experience.”

Liu said ‘Pilatus’ was also her favorite music piece in the concert.

“My favorite song from the Winter Concert was ‘Pilatus (Mountain of Dragons)’ because of how intense and cool the song was,” Liu said.

Duldulao said people she knew were in the audience. She said it made her confident to perform because of the pride she gets from her family.

“My dad and brother were in the audience,” Duldulao said. “It made me feel more confident because I know they always enjoy the music I play.”

Liu had many supporters in the audience which made her feel proud.

“My parents and friends were in the audience, and I was happy knowing they were there to support the concert and program,” Liu said.