Okuda inducted into Hall of Honor 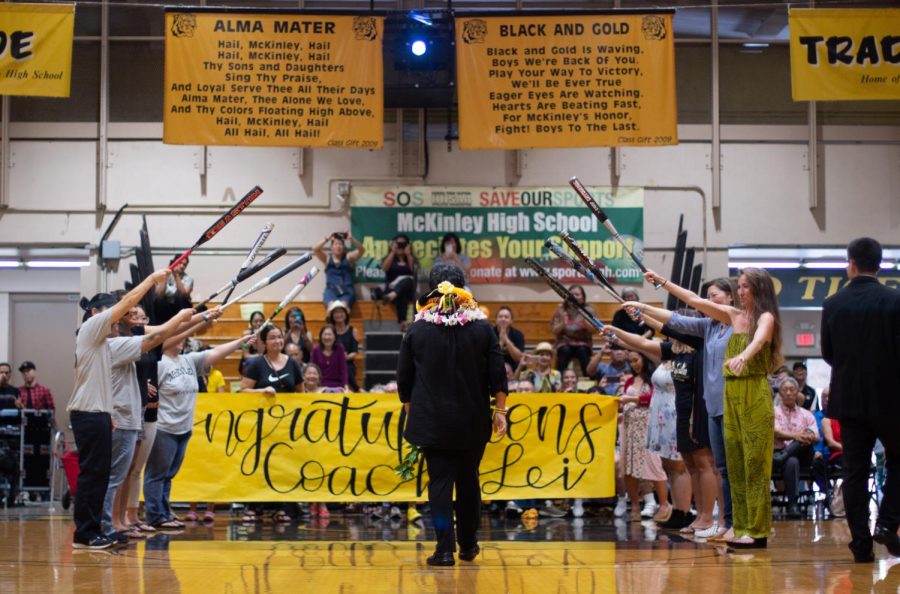 Okuda has been around softball for a majority of her life. She has played, coached and even reffed in the Olympics. Previous softball players that were coached by Okuda held softball bats as she made it back to her seat after her speech.

An Vo and Alexandria Buchanan

Until this year, Leilani Okuda was highlighted for umpiring at the Olympics. She can now add onto her titles as a member of the Hall of Honor, one of McKinley High School’s traditions. She was nominated because of her contributions to the school and the community. Students and staff gathered at McKinley High School’s gymnasium on Jan. 31 during an assembly to honor Okuda’s induction in the Hall of Honor with games, songs, and speeches.

“She’s one of our own and she works here; [she] never left McKinley,” Principal Ron Okumura said. “She graduated, went to college and came back [and] became a teacher because she wanted to give back everything that McKinley has given back to her.”

Okumura said the most important things to give back to communities are pride, tradition, honor, and respect.

“These are values of things that you learn here and more that will carry the rest of your life and these are just not words, these are meanings, these are things that you live by and in some cases, you die by,” he said. “These are [the] types of things that every single graduate, every single person who comes through the doors of this school carries with them for the rest of their life and we hope that you folks carry on the legacy so that you can bring greatness not only to yourself but to the McKinley ‘ohana.”

Okamura said choosing inductees for the Hall of Honor is based on their character and achievements.

“We always recognize those who carry these values who instill upon others the values that they learned here and to become a greater person in the community and giving back to the community,” he said. “These are the things that we recognize the inductees featured in the Hall of Honor.”

Senior Regina Nguyen, student body president, said the purpose of the Hall of Honor is to recognize the McKinley alumni who have brought honor to the school through their achievements in the community.

“Any individual may nominate an alumnus who has made a great impact in professional and career positions or earned rewards and recognition and [has] contributed to McKinley and the community,” she said.

Damien Chang, the student body vice-president, said the ceremony first began in 1986 when the first alumni were inducted.

“When you look out in the hallways of the administration building, you will find a multitude of names and faces who have made a significant difference in the world,” he said. “They’re the ones who have paved the way for us and have been inducted into one of McKinley’s most honorable and respectable traditions, the Hall of Honor.”

Daniel Pae, the student body treasurer, said the inductees of the Hall of Honor have incorporated the knowledge and skills acquired at McKinley into accomplishing their goals and vision, pursuing their dreams and making a difference in the community.

“Everyone has equal opportunity in becoming a future Hall of Honor inductee,” he said. “Keep working hard in school and you too may one day be inducted into the Hall of Honor.”

The audience cheers as Nguyen introduces the inductee of the Hall of Honor of 2020, Leilani Okuda.

Okuda is a graduate of McKinley’s class of 1983. As a student, she was active in numerous activities such as student government, Pinion staff, and Quill and Scroll. She served as an educator athlete and coach to the students of McKinley, teaching physical education for the past 25 years and has served as a softball coach since 1980. She was also an athletic director at Radford High School, MCAA collegiate umpire and president of the Wahine amateur softball association.

Malae said she was surprised when she heard that Ms. Okuda had a role in the Olympics.

“Ms. Okuda is definitely an inspiration for many,” she said. “Hearing that she umpired for the Olympics. I sat there and went, ‘Wait, what?’ She has inspired me to work harder and smarter, to be resilient and to believe in myself.”

“Amongst Ms. Okuda’s numerous titles, she has made positive impacts serving as a softball coach,” Lee said. “She inspired her players not only on the fields and in classrooms, but transformed the lives of her students tremendously.”

In 1996, Okuda was inducted into the international softball federation. OIA eastern division softball coach of the year in 2004 was selected as one of the only 12 umpires in the 2004 Olympic games in Athens/Greece and was inducted in Hawaii’s Sports Officials Hall of Fame in 2018. 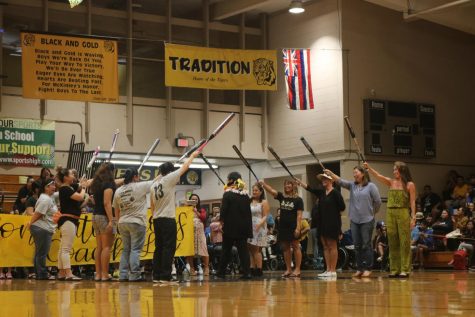 By Cheng Hong He

“Ms. Okuda continues to inspire students to uphold morals and serve the community,” she said. “She is noted through her contributions towards Robotics, Speech and Debate as a class level adviser and adviser for our National Honors Society.”

Okuda said she is grateful that she is an alumnus of McKinley and an inductee for the Hall of Honor.

“I’m humbled and honored to be inducted and to be among many distinguished alumni of McKinley’s Hall of Honor,” she said. “McKinley has, and always will be a very special place for me. My experiences here have shaped me into the person I am today and for this, I am very grateful.”

Okuda said she built life-long friendships and learned valuable lessons of the importance of character, teamwork, effort, and perseverance throughout her participation in sports and other activities.

“Throughout my career, I faced many challenges,” she said. “There were times when I failed, made mistakes, and times where I didn’t believe in myself. These moments were perhaps the most difficult, yet the most meaningful to me. I often doubted myself, and those doubts became obstacles and discouraged me from pursuing what I knew I was capable of achieving, and more importantly, what I had a passion for doing.”

Okuda said she now knows that she can make things happen if she’s industrious in her pursuit and (more importantly) if she believes in herself.

“My induction today is not merely my achievement of the result of the love and support of others who helped me to achieve my goal,” she said. “Because of them, the bumps in my room were a little easier for me.”

Okuda said she was fortunate to have a supportive family, mentors, and friends who provided guidance and a strong foundation for her.

“It is important for me to nurture the values that I’ve learned to others in hopes that they too may one day achieve their goals,” she said. “I’d like to thank my family, my mother who has always been with me, my mentors, my colleagues, my friends, and of course you, the students of McKinley.” 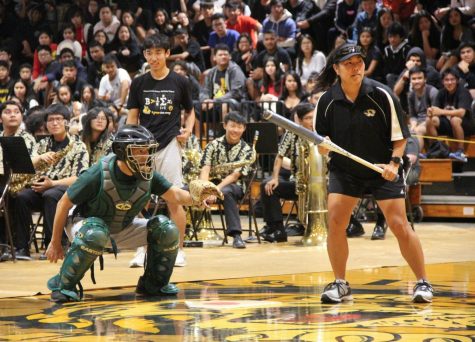 By Armando Nebres, photography 2 student Students, faculty, and a previous player for Okuda competed to see who could make the best call as the umpire.

A video of Okuda’s former softball students was displayed to show their appreciation for having Okuda as their coach. Many of them thanked Okuda for her guidance and explained how much of an impact Okuda has made in their lives.

“Even after graduating high school, her players still remember the impact their coach had on them,” Nguyen said. “Her players came back to McKinley to honor their coach as a ‘thank you’ for her dedication.”

Afterward, students, faculty, and a previous player for Okuda competed in a mini-softball game to see who could make the best call as an umpire. Okuda later demonstrated her way of being an umpire which ended the game as the audience honors Okuda’s induction in the Hall of Honor.

The National Honors Society performed a dance inspired by one of Okuda’s favorite characters (Peanut) in a television show, “Charlie Brown,” and played “Linus and Lucy (Peanut’s theme song)” as background music.

Furthermore, McKinley’s Symphonic Wind Ensemble 1 played “Bugler’s Dream (Olympic Fanfare),” and “Olympic Fanfare and Theme,” “The Olympic Spirit and Summon The Heroes” to honor Okuda as she was a part of the Olympics as an umpire.

Malae said she enjoys playing songs with the band during the Hall of Honor Assembly because it unites people with positive energy.

“Playing music in the assembly makes me happy,” she said. “You can see everything from the court. You see the students enjoying the music, classmates smiling and laughing with their friends. It feels rewarding when people bond through the music that we’re creating together.”

The assembly ended with the singing of the “Black and Gold” and the “Alma Mater.”

Chang said the assembly was held to honor the individuals who have dedicated their lives to making a difference in the lives of others.

“Whether it be through the sport of softball or service in the McKinley community or sacrifice in the line of beauty,” he said. “They are our pride and tradition. It is those innate qualities of aloha that we tigers possess and our challenge to uphold so that one day, we too can be honored here as proud McKinley alumni.”