But What Comes Next 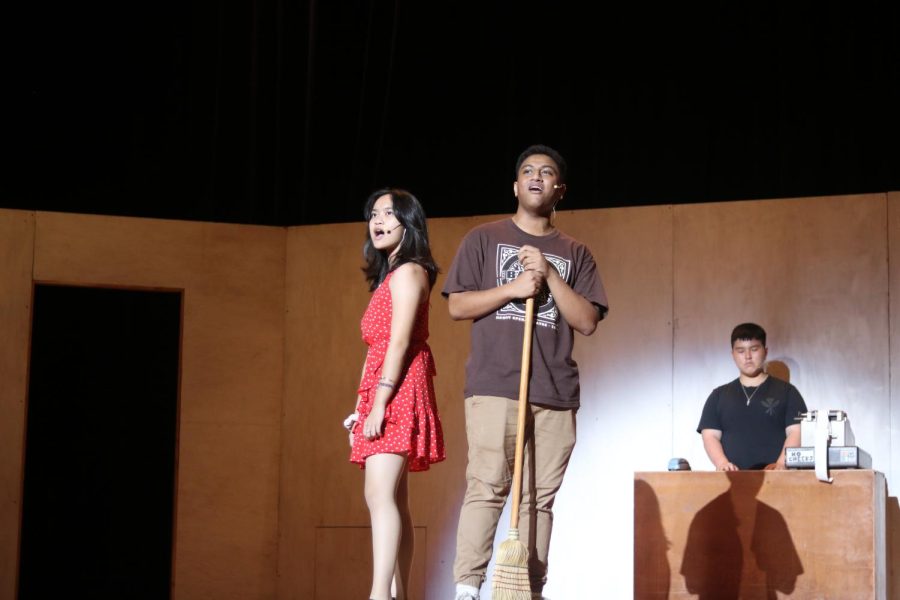 McKinley students leading a rehearsal for their October performance of "Little Shop of Horrors."

The McKinley High School Theater Group is returning after nearly a decade, with the musical “Little Shop of Horrors.” But there is much to be done, from choreography, directing and design, everyone is preparing before the curtains open on Oct. 14.
The MHS Theater was previously retired along with its former director, Jim Nakamoto. But during that time, MHS was known for its theater productions and plays. Founded in 1963 by Nakamoto, The McKinley Theater Group, also known as MTG, was essentially a group of passionate students and directors with a goal to create plays, musicals and theater. With Nakamoto’s 42-year involvement, it was difficult for the group to transition as MTG was passed along to various teachers once he retired. The group eventually disbanded in 2014 and remained a memory until it was time for a new director.
After working and reconnecting with theater alumni during a play in honor of Jim Nakamoto in 2021, chorus teacher Taketa-Kim decided that, “bringing theater back to the school would be a great direction to take, not just for the students but the community as a whole.” Then in 2022, Taketa-Kim took on the role as core director and revived the theater.
Shortly after, casting, training and practices started. Taketa-Kim decided that “Little Shop of Horrors” was a good start for the returning theater because it’s a play students were familiar with, requires a small cast and is perfect for the “spooky season” coming this October. But there were initial concerns about finding students passionate about acting and theater. ‘Little Shop of Horrors’ is a dark, creepy sci-fi show, but a comedy of it.
Taketa-Kim wanted to give students the opportunity to audition, regardless of background to ensure fairness on stage. Then, the “Creative Team” was assembled, which consisted of many teachers and community members who joined together to help students with the course of production.
-Natasha Taketa-Kim, acting director
-Dwayne Sakaguchi, choreographer
-Scott Takata, singing director and pianist
-Joseph Nakamoto, music director with band
-Anson Bernal, construction creator
-Kristi Auyoung, Jeffrey Ideta, Eren -Star Padilla, stagecraft
-John Messer, light and sound engineering
These teachers and members greatly impact MTG and helped make the play possible, said Taketa-Kim.
Starting in the summer of 2022, the theater group began working on stage etiquette, vocal training and choreography. Since then, the group met, practiced and trained for hours a day.
Junior actress, Kaylie Ebesutani who plays Ronette said, singing and performing has always been her dream.
“I am honestly excited to do the bows at the end of the play,” she said.
Senior Danielle Castro, who plays the lead role, Audrey as well as the role of Crystal said performing is her way of branching out.
“Personally I have always been inside my shell, but my family kept encouraging me to do something performance-wise, and then this came up,” she said. “Something I am excited for is to do the whole play in full for the first time.”
Director Taketa-Kim said, she’s most excited to showcase the students’ contributions.
She said, “I am excited that the students worked very hard and were very dedicated to make this show happen.”
The course of production was composed of many different aspects of theater. From stage crafting with the help of art club and wood shop, music preformed by the McKinley band, vocal training, choreography, MTG and everyone else involved worked together to bring theater back to MHS. But there were some challenges along the way, not just from the cast members, but from the teachers and directors as well.
For senior actress Dior Lee, her role required her to be a vocal singer, but that wasn’t her strongest suit. “A difficulty for me personally would be singing. I don’t sing in public so I had to learn,” Lee said.
Junior actress Ebesutani struggled with getting into character and portraying them accordingly.
The character I play is so opposite of me and I still try to improve their mentality,” Ebesutani said.
“The biggest challenge is trying to balance the schedules. Everyone’s availability is different,” Taketa-Kim said. Cast members pushed past the initial awkwardness and worked through the challenges. Whether goals to allow students the chance to work with theater, make new connections or try new experiences, MTG continues to revive theater at McKinley High School.
Taketa-Kim said she appreciates the endless hard work every single member puts into the production.
“The biggest thing that was truly my favorite is seeing the many people willing to work together, to put on something as simple as a show that’s only two hours long with endless months of rehearsal, preparing and committing the time for our students and community has been wonderful,” Taketa said.
“I want the audience to know how hard we worked on this to give them a good show,” Ebesutani said. Over the past years, there were many flawed attempts to revive the program, but Taketa-Kim plans to keep MTG active for years to come. She wants to allow students the opportunity to collaborate with others and so that people can witness live performances. She plans to take college classes to enhance her knowledge on production and acting to give students a better theater experience.
“Without every single one of them, this would not be possible,” Taketa-Kim said.